Just like Frankenstein’s monster, it can feel a bit like lightning hit your bike the first time you walk up and it emits a friendly electric rainbow from the handlebar mounted SmartHalo. This is like your bike receiving a brain. It’s actually a little freaky the first time.

Designed by super bright young guys in Montreal, Quebec. You may have seen the successful SmartHalo Kickstarter campaign (which raised over $500k).

While it still doesn’t do all the legwork for you, your bike just became a whole lot smarter. I have been riding with it for the last 6 weeks. If you haven’t already named your bike. The lifelike interactive signals and pulses trick you into thinking your bike just got a voice (or maybe even a personality). It’s serious tech that deserves a shoulder check.

Let’s run through the Frankenstein features of this beast.

The front light can be set to static or blinky and is visible over 750 m. You can set the light to turn on automatically when it senses the darkness or manually double tap to turn it on. Personally, having the integrated light is one of the greatest, yet most simple features of the device.

I always hate removing my front light when parking anywhere outside. In Vancouver, you can’t leave your bike outside for a moment without your lights (or anything that can easily be removed from your bike) quickly being whisked away. So having the locked front light safely attached (SmartHalo can only be unlocked with its fancy magnet key) is a huge benefit.

I work late so I ride in the dark a lot. SmartHalo’s front light and warm glow is a welcome addition to my commute.

It Knows the Way! (Navigation)

Intuitive turn signals light up pointing out the most bike friendly routes. First, you turn on the app. Enter the address of your destination and hit the bike icon. Start pedalling a couple of meters and the navigation kicks in. The colours turn from yellow to green the closer you get to the destination and upcoming turn signals flash quicker the closer you get to making the next turn. This is very cool.

During my testing period, I mostly had the setting changed from “Turn-By-Turn” mapping to instead use the “Compass” feature. The compass feature was awesome. It keeps pointed toward your destination. You can use your human intellect to decide on the best routes to take. I initially had some beef with the mapping features (read on to the “dumb” section) and the compass was a great compromise. I could get by navigating unknown territory with this function alone.

But as you will also read, the mapping “Turn-By-Turn” function was vastly improved in a Navigation 2.0 software update during my SmartHalo tenure.

It Only Obeys Its Master! (Alarm)

This bad boy can turn into one mean bugger if you push its buttons the wrong way (ie: an unsuspecting ruffian starts making trouble at the bike racks). A 100 dB alarm system is equipped and becomes a serious antitheft mechanism. It will give you a warning first (a progressive sequence of warnings – until it really blows its top). A small barking mother goose nags at you to get away until you’ve pushed it too far. Then a full-on fire truck sounds like it pulled up to extinguish a fire on your eardrum.

I was showing off in our office and accidentally pissed it off before learning how to easily disarm it. We had a lot of nervous neighbours stop by to make sure everything was ok. Luckily (once you know), you set up a handy little tap code and can shut the alarm off with a few taps of your own little diddy.

As long as you have the SmartHalo App turned on, and are in proximity to the device, it recognizes you and won’t go spouting off. You can stop in for a growler refill and when some back alley bad boys start making trouble, you will hear the rage of Frankenstein calling you while you casually finish tasting the new seasonal batch.

It Wants You to be Better (Fitness)

The Goal Tracking feature lets you count the number of donuts and peanut brittle you can consume per day over the holidays based on the amount of cycling you’ve got logged. This is a nice to have feature. Some people will get a lot of value out of it. I don’t care that much. I do my fitness tracking elsewhere and use my bike as transportation.

Although it can’t book your meetings and tell the cold callers to FO, it can tell you when you are receiving incoming texts or phone calls. At which point you need to pull over and safely use your phone (don’t be that no handlebars guy texting).

For me, however, this is kind of a non-feature. If I am really expecting an important call and I absolutely need to be biking somewhere at that time, I will ride with my apple earbuds in (just one… safety police don’t hate on me) and take the call while on-the-go. I have had a few fun meetings this way 🙂

Otherwise, I am quite happy not to be disturbed on my bike commute by my annoying phone. I actually turned this feature off pretty soon into my SmartHalo experience. I get enough notifications on a daily basis, that I really don’t care about the extra dings. Usually, at commuting times, it is something like… “What should we eat for dinner tonight?” I don’t respond to much while I’m on the road. I can text or call back when I get there.

Hey, this thing is still called “Smart” Halo, right? You bet. But with any new creation, things need time to mature. I am an avid cyclist in Vancouver and like to think I have figured out most of the best bike routes around.

At first, I was pretty confused when biking home on my regular work commute, SmartHalo wanted to take me up some of the main busy, car filled routes. I live just off one of the most common bike routes heading North – South in Vancouver (Ontario Street). This is 2 blocks over from the much more congested Main Street but for some reason, SmartHalo kept wanting to take me up Main (and other weird turns along the way).

Like any keen bike nerd, I looked into it. When I was first using SmartHalo,  it ran off a mapping system called Map Box. What the hell kind of bike map is this? I thought at first. It was pretty bad at picking any safe bike routes. That was really my only qualm with what is otherwise a brilliantly thought out machine….but you need to start somewhere and I don’t know how API and licensing works with this, so it’s hard to criticize.

However in the relatively short time, I have been using SmartHalo, the team obviously recognized this issue. Now, SmartHalo runs off Google Maps (which definitely recommends taking Ontario Street). Hooray! My faith in technology bringing my bike to life was restored. I thought much fonder of SmartHalo safely getting me to an unknown Christmas Party location without much hassle.

This thing grows up fast!

Bottom Line – Should You Buy It?

For a mere $149.00 USD for the highest tech I have ever used on my bike, I can’t think of too many reasons not to buy it. The design is slicker than bear shit. Very Steve Jobs-esque. No buttons confusing the functionality. You control everything on your phone app before starting the commute.

Riding with it is an uber pleasant on-bike experience with navigation you can really trust (well as good as Google) now that it runs on Google Maps. I recommend turning the sound off that dings at every new turn, text or phone call. It’s much more calming just riding with the light signals and pulses.

Unboxing is an immersive Apple-like experience. Beautiful layered packaging with dummy proof step-by-step installation and setup instructions (no wonder they are now selling shovel loads of SmartHalos in Apple Stores across North America). 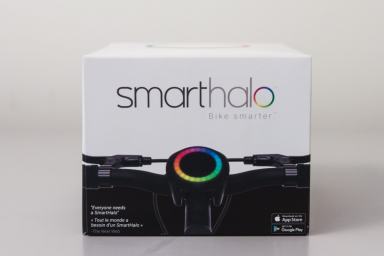 I am cautiously interested in the weather resistance level and recommended temperature range. I used to ride until about -20 degrees Celsius in Calgary, Alberta as long as it wasn’t a blizzard. Now, it can pound rain in Vancouver at a moments notice. The box says water resistant and good to -10. It is certainly built to durable levels of quality. I’ve ridden in mid-hard 5 mm of rain with it and had no concerns. My guess is its pretty much as hardcore as you. But should still be used with some common sense when it comes to ridiculous weather.

The on-demand theft-proof light and high tech alarm system alone is worth the $149.00. When you add in the newly improved, NOW AWESOME Navigation features and automatic stat tracking, it’s a pretty affordable no-brainer. In fact, just give your bike the brain…and a name.

Ready to upgrade your bike commute? Pair the SmartHalo with a Two Wheel Gear pannier for the ultimate brains and beauty commuter combo.

SmartHalo Stats by the Numbers